Equine Polo is Not the Only Version of the Sport!

Polo may be the oldest of equestrian sports, but it is not confined to the equestrian alone. Though not as popular or widespread as regular horse polo, there are many other fascinating polo versions, including camel, yak, elephant, bicycle and Segway polo…! Here’s the lowdown on these five curious recreations.

In Dubai They Play Camel Polo 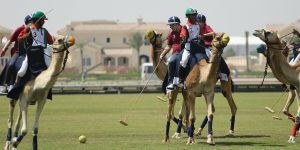 Inspired by the phenomenon that is Elephant Polo (below), Camel Polo was invented in 2007 by one Steve Thompson, head coach at Dubai Polo Academy. It is polo with an exotic, Arabian twist, which has been attracting more and more visitors of Dubai in the past decade, eager to experience the sport on the back of a ‘ship of the desert’. Perhaps a little more bumpy than the regular equine version…

Also known as Sarlagan Polo, Yak Polo originated in Mongolia in the early twentieth century, initially established as a form of tourist attraction. The domesticated bovid was at the time a dying breed, so the introduction of the sport also gave a helping hand to keep the yak in existence. Yaks are much slower than horses so the field is appropriately smaller than usual, and the game is played with two five-player teams. Along with Mongolia, Yak Polo is also played in the Chitral district of Pakistan.

Polo on elephant-back was invented by the British, though first played in India and Nepal in the early 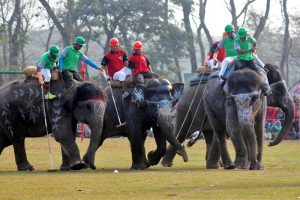 nineteenth century. When the British first came to these countries they adopted their native equine polo for use with the native animals they had at their disposal – elephants. Representative of the strength and power of kings and emperors in Indian culture, it was somewhat fitting for elephants to be utilised in the ‘sport of kings’ in this area of the world. As the large grey creatures are much less agile than their equine counterparts this version of the sport is played on a shorter court and at a slower pace.

The traditional version of Bicycle Polo, played on grass, was invented in 1891 in County Wicklow, Ireland, by retired champion cyclist Richard J. Mercedy. Comprising of six-member teams, with four on the field at a time, this two-wheeled version of polo was a demonstration (unofficial) sport at the 1908 Olympic Games held in London, in which Ireland won. During the twenty-first century Hardcourt Bike Polo has also gained popularity. Played with teams of three players, and on a hard surface instead of grass, Hardcourt Bike Polo is generally faster-paced than that of it’s grass-footed equivalent. 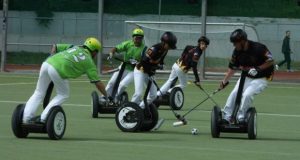 When you thought things couldn’t get any stranger, Segway Polo arrived. The personal transporter-aided sport gained recognition in 2004, after being played by members of the Bay Area Segway Enthusiasts Group. The rules have been adopted from Bicycle and Horse Polo, and provide a thrill for millennials looking for a motorised slice of the action.

We do not have any elephants or camel polo events coming up anytime soon, however we do have equestrian polo tournaments.  These make a fun day out whether you are a fan or not!  Why not check our upcoming events, and treat yourself to a meal at our onsite country pub, The Millstone Hare!