What’s Actually Happening When You Watch The Sport Of Kings: The Basics.

Polo is a fast-paced game, thoroughly enjoyable to watch and the epitome of competitive sportsmanship. From the moment the ball leaves the referee’s hand, to the final bell, you’re guaranteed to be perched on the edge of your seat, heart pounding, craning your neck over excited heads, in an effort to keep the players in view as they gallop back and forth. The intent is easy to understand; players have sticks, there is a ball to fight over and two goals to fixate upon. However, you’ve probably found yourself squinting up at the commentator box after hearing a particularly confusing remark, wondering what on earth they mean. The vast size of a polo pitch, and it’s unbelievably quick play time make it easy to miss playing techniques, fouls or manoeuvres; one minute the herd are racing for the ball, then suddenly whistles are blown and riders are fighting to slow themselves from a gallop. A penalty is given and you’ve no idea why. For those amongst us who simply enjoy polo for the fantastic visual entertainment that it is, here are a few basic phrases you can expect to hear during a match.
“Chukka!” 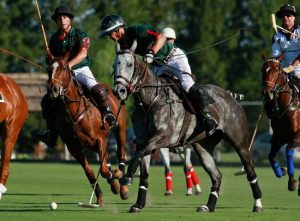 Polo matches are usually comprised of 4-6 chukkas. Each chukka is 7 1/2 minutes, and goals are accumulative; the team with the most wins. A horse can only be used for 2 chukkas, and they cannot be consecutive. Just imagine having to sprint, stop, turn and sprint again, for 15 minutes! Players actually often choose to swap a horse halfway through a chukka, which is why you can see grooms exercising horses around the pitch; a lot of professionals will jump from one horse to another, without touching the ground! This can be because the horse feels tired, or perhaps too excitable, or because it is being saved for later chukkas. There is a bell at 30 seconds remaining, followed by another bell and a cry of “Chukka!” to finish.
Throw-Ins/ Line-Outs 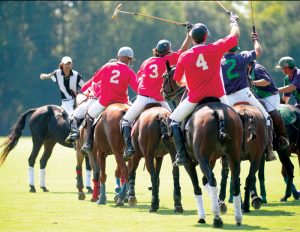 Polo begins with one referee (there’s usually two, for accuracy, and they’re called Umpires) throwing the ball between the two teams, who are lined up facing one another in a Line-Out. Fastest to the ball gets right of way, then the game begins. Throw-Ins are also used when a penalty is called for both teams fouling at the same time, which is why you will sometimes see them happen halfway through a match. 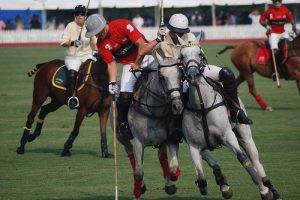 This a safe, legal way to play in defence. It involves using your horse to push another player’s horse away from the ball, so that you or another member of your team can take it. This isn’t always gentle when the horses are galloping, and you’ll see horses and riders bump and bounce around like dodgems at a fairground. It definitely feels harder than it looks from afar! Ride-Offs can also be difficult to pull off when everything moves so quickly; you must be of the same speed as the other player when you collide, and you cannot approach at too harsh an angle. “Sandwiching” (two players on one) is also considered pretty rude, as well as dangerous, and incurs a strict penalty.
Handicaps and Goal Difference 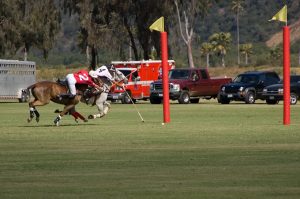 The aim of the game is get as many goals as possible. However, some teams start with a Goal(s) Advantage, because the Team Handicaps are unequal. Each player holds a Handicap, which denotes their value to the team and runs from -2 to 10. If the four players have a Handicap each of 2, the team is 8 goals. If the team they are playing is, say, 9 goals, they will begin the match with a half (0.5) goal. So, even if one team is stronger, the other team is given an advantage at the beginning in order to make the game more equal. Polo games are categorised by the goal level they will permit. 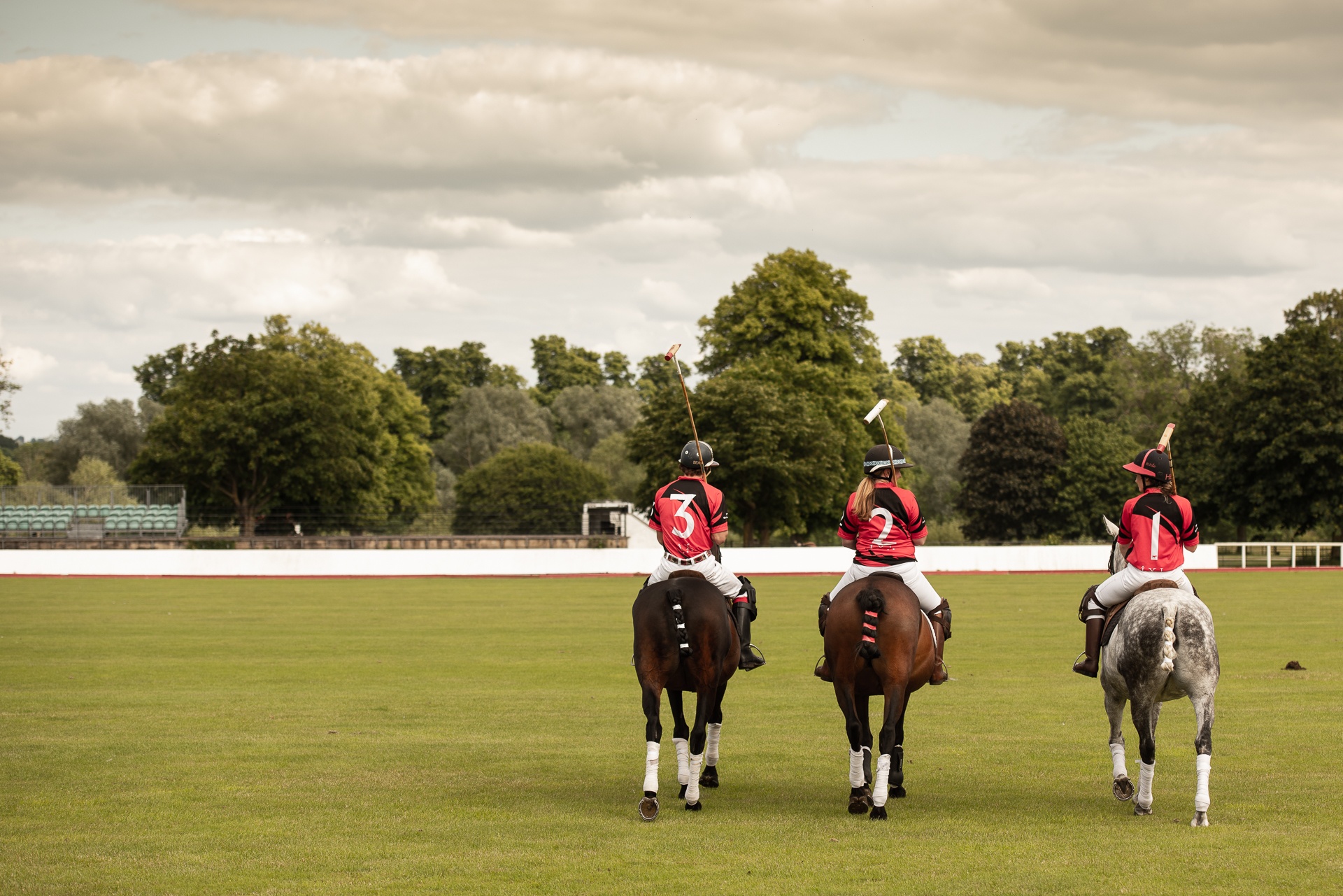 The Tradition of Divot Stomping

The Tradition of Divot Stomping