The History of the Polo Shirt

Polo shirts are not just worn by polo players, but also by tennis players, school children, teenagers, men, women… near enough everyone has a high chance of owning, or having worn, a polo shirt at some point in their lives. But where did this clothing staple come from? Here’s the history of the legendary polo shirt, with four men the classic garment’s pillars.

The Roots Of The Polo Shirt 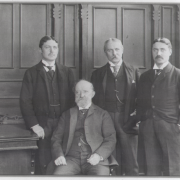 John Brooks and his sons Walter, John E, and Fredrick

Initially, polo was played in long-sleeved shirts made of thick cotton, which was not the most comfortable or practical item in which to conduct the game. In the late nineteenth-century British polo players invented the button-down collar – the very first of its kind – which prevented the collar from flapping in the wind; the first iteration, if you will, of the polo shirt we know and love today.

At the end of the nineteenth century John E Brooks, of US clothing company Brooks Brothers, came to England on a European buying trip. During this trip, he happened to watch a game of polo and noticed the buttoned-down collars of the polo players’ shirts. Taking this invention back home, in 1896 Brooks Brothers launched their button-down dress shirts, said to be the most imitated item in fashion history.

The Canadian-born British polo player Lewis Lacey furthered the reach of the emerging ‘polo shirt’ in the 1920s. Uber successful in his own right, Lacey won the Argentine Open a total of eight times between 1915 and 1937; won the United States open championship in 1922; and 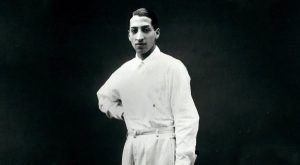 captained the English team in the International Polo Cup in 1924 and 1930. In the 1920s he opened a sports shop in Buenos Aires, Argentina, selling short-sleeved polo shirts emblazoned with a mounted polo player on the left breast, a design that had originated at the Hurlingham Club (established by the British colony outside of Buenos Aires) where Lacey had learned to play.

Though a legend in tennis, the French sportsman did a lot for the advancement of the polo shirt. Improving his tennis attire in a similar manner in which the polo shirt had been enhanced, Lacoste developed a new-style shirt with short sleeves, an unstarched collar, a longer back and using pique cotton technology. He went on to wear this shirt in his winning 1926 US Open Championships, catching the eye of many a polo player. In the early 1930s, he founded La Chemise Lacoste, a clothing brand that began to sell the recognisable crocodile logo-emblazoned shirts. 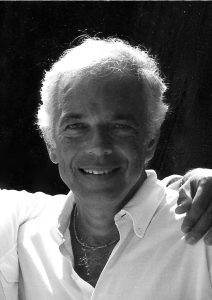 In the late 1960s, over forty years after Lacoste modelled his new-look shirt, Ralph Lauren launched a menswear line ‘Polo’, a name chosen to portray sophistication and timelessness. In the early 1970s, his signature ‘Polo Shirt’ became a prominent piece of the line, with a polo player logo on the chest. Though not designed specifically for polo players, it was very similar to polo attire of the time and helped hugely to spread its popularity.

The term ‘Polo Shirt’ has now become synonymous with the Ralph Lauren model, but designers all over the world are making their own versions, in turn making their way onto the backs of polo players, and into everyday wardrobes.